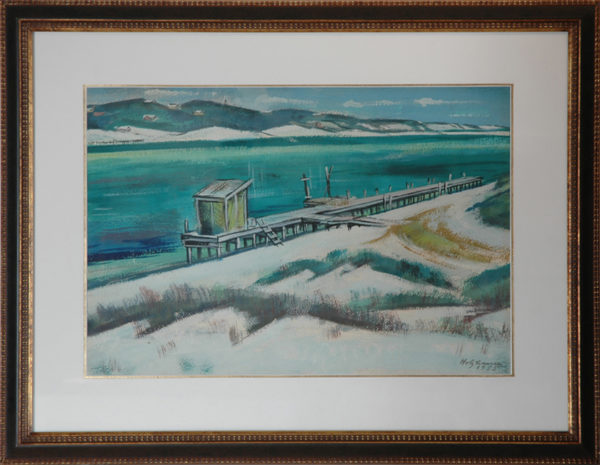 Emil Holzhauer (1887-1986)
Born in Schwabisch-Gmund, Germany, lived in NY, GA, FL. Avant-garde painter whose work is characterized by heavy lines filled with color and with rhythmic, harmonic space in watercolor, oil, and casein. Awards: Logan Medal and Purchase prize at the 10th International Watercolor Exhibition in Chicago, 1930. His work was heavily influenced by scenes from the South. In Germany, he apprenticed in a silver and metalware factory where he learned design and modeling, and in the evenings, he studied art at the Staatliche Werkkunst Schule. He arrived in New York in 1906 and with fellow students Edward Hopper, George Bellows, and Rockwell Kent, studied art with Robert Henri. The 1913 Armory Show combined with Henri’s teaching led Holzhauer to adopt modernist elements of Expressionism, Fauvism and Social Realism. He was especially influenced by the expressive images of Cezanne, and the stylistic surprising canvases of Van Gogh. Instructor: AIC, Wesleyan College in Macon, GA from 1942 to 1953, and his years in Georgia were especially influential on his work. In 1953, he retired to Niceville, Florida where he taught until 1972. His first solo exhibition was in 1915, and during his lifetime, he was included in over 75 group shows and many one-man exhibitions.