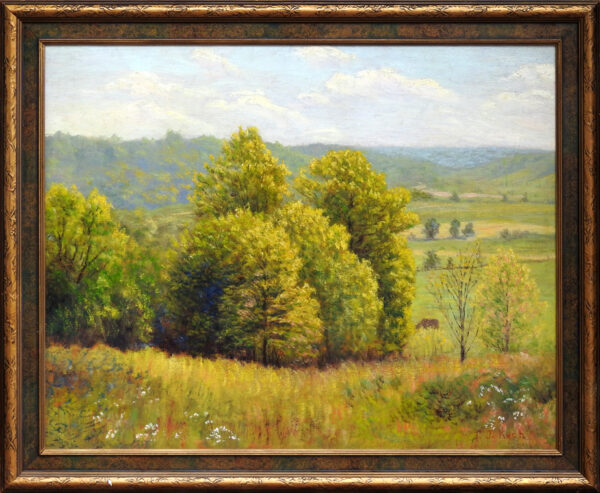 T.J. Koch was highly accomplished in musical composition and performance and in painting and art instruction. Koch was born in 1881 in Dusseldorf, Germany. At the age of four, T.J. came to America with his parents. While in Cleveland, T.J. served as a classroom teacher. He took advanced musical studies at the Cleveland Conservatory of Music where he studied musical performance and composition under Wilson G. Smith. Smith encouraged T.J. to become a concert pianist. A friend, Edward Rechlin had become a renowned concert organist, studying and touring in Europe and the Americas. Rechlin continually encouraged T.J. to become a concert performer. In addition to his musical interests and his dedication as a Lutheran teacher, he was a self-taught plein-air landscape artist. He studied with German artist Thomas Von Dreger. Von Dreger had come to Columbus, Indiana from Austria to paint the portraits of a local prominent family. While staying with T.J., Von Dreger encouraged T.J. to pursue a career as a landscape artist. He painted during the summers with several prominent artists of the Hoosier Salon in Brown County, Indiana. These artists included Adolph Schulz, Will Vawter and T.C. Steele.