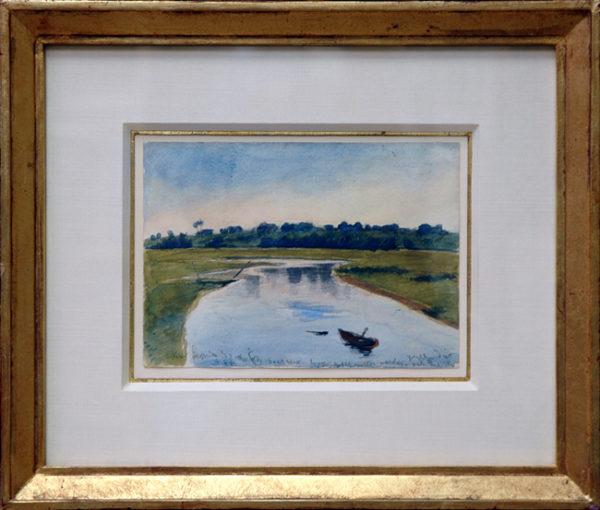 An American Modernist artist, Oscar F. Bluemner was born in Preuzlan, Germany. He lived in Chicago, New York City and South Braintree, MA. He was trained as an architect like his father and grandfather. He studied painting and architecture at the Royal Academy of Design, Berlin in the early 1880s. He exhibited at the Royal Academy, Berlin; Gurlitt Galleries, Berlin; Armory Show, NYC, 1913; Forum Exhibition of Modern American Painters; Bourgeois Gallery, NYC; The Intimate Gallery, NYC; Whitney Museum of American Art, NY; Salons of America; University Gallery, University of Minnesota. He first adopted the impressionist style and urban subject matter of Maurice Prendergast, but after a trip to Europe, his style changed drastically to that which was geometric and reflected Cubism and Futurism, preferring harsh reds and greens and bold outlines. Inspired by Alfred Stieglitz, works of Matisse, Cézanne, and the Futurists he became fully committed to modernism. His work was well received by the critics, especially when he was endorsed and promoted by Stieglitz who sponsored Bluemner’s first American exhibition.