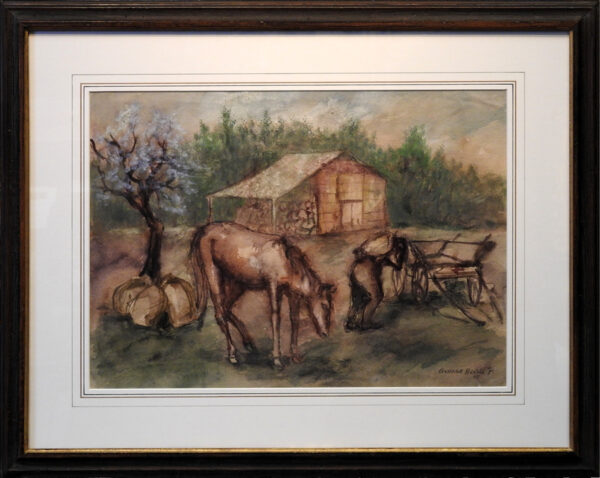 George Beattie, Jr. was born in Cleveland, Ohio and studied at the Cleveland School of Art. He served as a Visual Aid in the Air Force during WWII, later married and moved to Georgia. He taught at the Georgia Institute of Technology School of Architecture and at the Atlanta Art Institute. During travels to Greece, he was inspired by classical ruins. Beattie described his art as an attempt “to express a sense of the luminous antiquity of the past as an undertone in the present appearance of ancient lands.” Known for landscape, genre, and murals, Beattie’s works have been exhibited at the Metropolitan Museum, NY, the Cress Gallery at the University of Tennessee, and the Art Institute of Chicago, IL; he also has works in the collections of the Montclair Art Museum, High Museum of Art, Georgia Museum of Art, and Whitney Museum of American Art. In Macon, Georgia, a cycle of the artist’s murals depicts regional history themes in the U.S. Federal Post Office building.