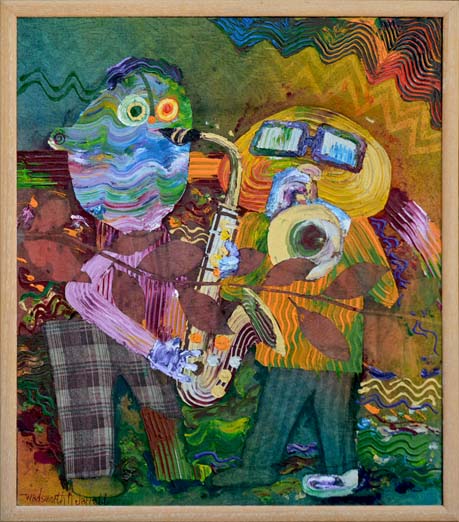 Wadsworth Jarrell is an African American artist who was born in Georgia in 1929 and educated at the Art Institute of Chicago.  He is one of the founding members of AFRICOBRA, (African Commune Of Bad Relevant Artists) a revolutionary artist school of thought founded in the midst of the Civil Rights Movement.  During the 1960’s and early 1970’s a new social and political awareness developed among African-Americans.  This is the foundation upon which Wadsworth Jarrell has built his work.  Mr. Jarrell feels his art is a reflection of the attitudes, the many colors, the style, the hip, and the rhythm of his people.  Often found in his work are images of horse races, jazz musicians, and the African culture.  As an artist he has dedicated himself to creating social imagery that intrudes upon the thoughts and jars the senses of his viewers.  As an integral part of our local community the work of Wadsworth Jarrell is a part of the permanent collection of both the High Museum of Art and the Atlanta Bureau of Cultural Affairs.