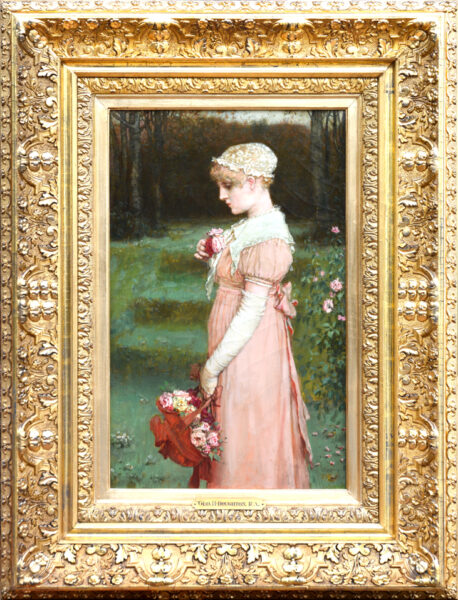 Born/lived: Norwich, England in 1833 and lived in London for the second half of his life, Boughton’s formative years as a self-taught artist began in Albany, New York, where his family settled in the 1830’s.

Known: as a leading landscape and genre painter in the United States and abroad, George Henry Boughton had the ability to express sentiments and pathos on canvas. He illustrated editions of Washington Irving’s Rip Van Winkle and History of New York and Nathaniel Hawthorne’s Scarlet Letter. In his landscapes, he painted scenes of England, Brittany and the Netherlands. Boughton established a studio in London in 1861. Though now living in England, he focused on subjects of American Colonial history. If ever there were a painter who could tell a story with genuine sentiment, using soft tones and colors, it was Boughton. A London critic once declared that he “has learnt the secret of putting natural feelings into rustic figures, which has been almost entirely wanting to English painters.” The New England history of the Puritans became the subject of his most famous painting, Pilgrims Going to Church (Early Puritans of New England Going to Church), completed in 1867, now at the New York Historical Society.

Studied: In 1860, he traveled to Paris where he studied under Edouard Frere and Edouard May. The French influences were subsequently reflected in his style.