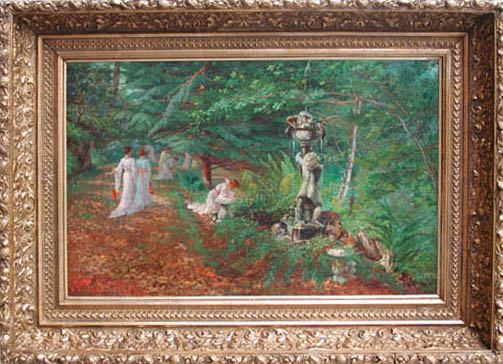 Born/lived: Born in Hartford, CT; lived in Sandusky, OH and NY. In 1903, Curran was invited by artist Frederick Dellenbaugh to Cragsmoor, NY, an art center in the Hudson River Valley where Curran established a studio.

Known: best known for his paintings of female figures posed within picturesque vistas of the Cragsmoor area, in an impressionist style. He also painted genre scenes, portraits and landscapes, as well as a series of views of the Imperial Temples of Peking.

Studied: Cincinnati Academy of Design; the National Academy of Design, under Walter Satterlee; the Art Students League; the Académie Julian in Paris, where he studied with Benjamin Constant and Jules Joseph Lefebvre.

Taught: the Pratt Institute, the Cooper Union and the National Academy.