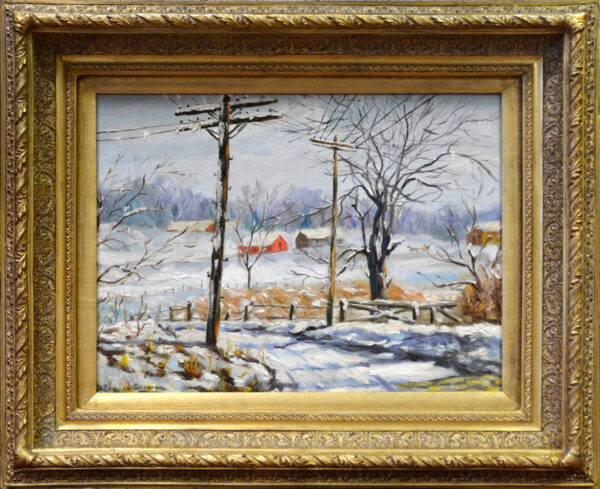 Known: Greacen was an Impressionist painter. He went to Spain with W.M. Chase and a group of his students; he lived at Giverny from the summer of 1907 until 1909, painting vivid garden scenes. Returning to the U.S. in 1909, he lived in NYC and also became part of the summer art colony at Old Lyme, CT, which he visited from 1909-17. He was an influential figure in the New York art community. He also painted in Bermuda, c. 1911. Admirers of Edmund Greacen’s paintings applaud his delicate colorings, usually pale grays, greens, and violets. Like Claude Monet, Greacen was interested in capturing specific times of day, such as the luminosity of midday or the misty haze of early morning. He was father and teacher of the known artist, Nan Greacen.

Studied: New York University; Art Students League under Kenyon Cox, who taught in the French academic method; New York School of Art(The Chase School) with W.M. Chase, who taught liberal methods, en plein air and drawing subjects from life on the canvas with a fully loaded brush; R. Henri, F.V. DuMond, F.L. Mora and Everette Shinn, and later under Fred Yoker and Walter A. Clark, and in Europe. In Spain he was introduced to the old masters in the Prado in Madrid where he copied several paintings by Velasquez. Monet’s influence on Greacen is particularly evident in a canvas entitled Effet de neige exhibited in the 1907 Paris Salon. This superb impressionistic landscape shows a stream in winter. It is subjectively expressive through its shimmering surface quality, which results from the spontaneous brushwork, and the high-keyed palette.

Positions: He helped found the Painters and Sculptors Gallery Assoc. which was renamed Grand Central Art Gallery. He and others founded the Grand Central School of Art offering courses in illustration, interior decorating, and anatomy in 1924, serving as its president for 20 years. He was the founder of the League of American Artists. He and Rae S. Bredin organized the Manhattan School of Art, NYC and offered courses in illustration and painting.