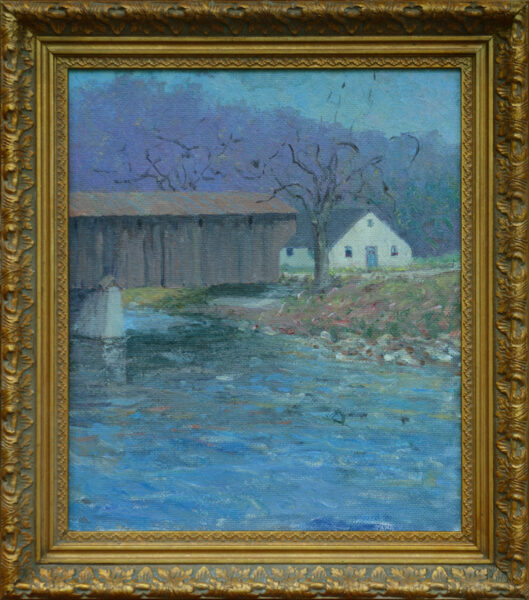 Known: was one of the most significant American Impressionist painters of the first half of the twentieth century. He lived in Old Lyme for more than 60 years, at his death was one of the oldest American Impressionist Landscape painters. During the 1920s, he began painting scenes of underwater life and his trips to Bermuda. He was one of those responsible for preserving the Florence Griswold House as a museum after her death. He painted the oil Cranberry Breaker-Hazelton, Pa., which debuted to much favorable attention in 1907 at the annual exhibition of the Corcoran Gallery of Art in Washington, D.C. Of the painting — which was shown again the following year at the annual exhibition of the Pennsylvania Academy of the Fine Arts — the Mount Carmel Item (Pa.) newspaper wrote, “it is the work of a master,” and called Hoffman “one of the most eminent young artists of New York City.” Additionally, the painting was selected for representation at the twelfth annual international exhibition of the Carnegie Institute in Pittsburgh, displayed alongside the work of luminaries such as Winslow Homer (1836-1910), Thomas Eakins (1844-1916), Childe Hassam, and Robert Henri.

He spent the winters of 1914 and 1915 in the historic American cities of St. Augustine, Florida, and Savannah, Georgia, in the process becoming one of the first Northeastern artists to paint the Southern scene. While in St. Augustine, he completed a number of paintings of the city’s streets, with their pastel-shaded buildings and Spanish architecture, as well as several highly regarded compositions featuring palmetto trees — low-growing, fan-shaped palm trees that grow in the sand dunes by the sea. As Jeffrey Anderson, author of the monograph, Harry L. Hoffman: A World of Color, wrote: “In many ways these paintings, direct in their focus on an exotic landscape form enveloped in tropical light, prefigure his undersea paintings of the coral gardens of Nassau.” But it was Hoffman’s work produced in the city of Savannah, Georgia, that resulted in his most indelible images of the region. Evoking the fierce summer sunlight as reflected off the colorful architecture, Hoffman’s Savannah paintings feature loose, Impressionistic brushwork and a vibrant, richly saturated palette dominated by pinks, greens, oranges, and yellows. In large, panoramic compositions such as Street Scene, Savannah and A Savannah Market, he provided a glimpse of daily life in the city, depicting local African-Americans working and shopping under the intense heat and against the backdrop of Savannah’s famous marketplace. The result, according to art historian Carol Lowrey, author of A Legacy of Art: Painting and Sculptures by Artist Life Members of the National Arts Club, were paintings that “stand out in the club’s collection,” and “celebrate the cross-fertilization of the Southern locale with an innate artistic imagination finely honed at the most sophisticated French and American fountainheads.” Additionally, another painting from the Savannah period, The Cotton Gin (one of Hoffman’s personal favorites), is a much-heralded representation of a desolate warehouse space peopled by hard-working African-American women going about their labors in quiet dignity (one has a cane for support), the only illumination provided by a shaft of sunlight penetrating the solo window.