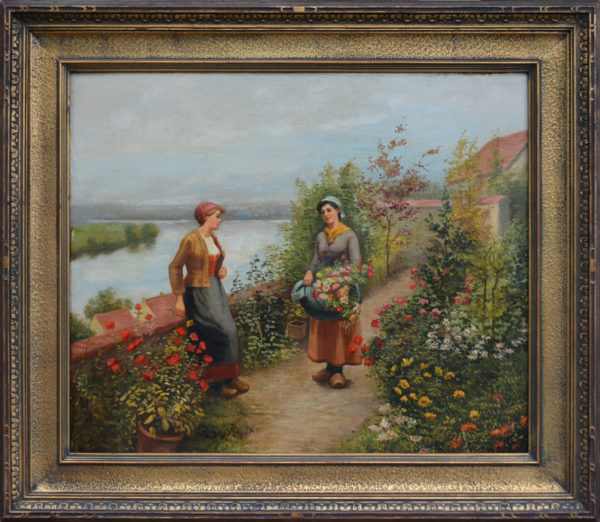 Daniel Ridgway Knight (1839-1924)
Knight was born in Philadelphia and became a student at the Pennsylvania Academy of Fine Arts from 1858 to 1861. He then studied at the Ecole des Beaux-Arts with academic painters Charles Gleyre and Alexander Cabanel and shared classes with Renoir and Sisley. In 1863, he returned to Philadelphia to enlist in the army during the Civil War. In 1871, he returned to France and settled in the town of Poissy to be near the renowned academic painter, Jean Louis Meissonier, who directed his artistic focus to peasant figures and influenced him with a richly detailed style of realism. He was known as an artist known for his depictions of serene, peasant female figures in bucolic landscapes with pristine lighting. By the mid-1870s, the idealized peasant figures became his signature expression, and his presentation contrasted greatly with the emerging realist movement in French art led by Jean-Francois Millet that focused on the hardships and poverty of rural people. From 1896, he maintained a studio outside of Paris in Rolleboise, and took his subjects from the surrounding countryside and local people. His work was in high demand both in France and the United States, where he received many awards.