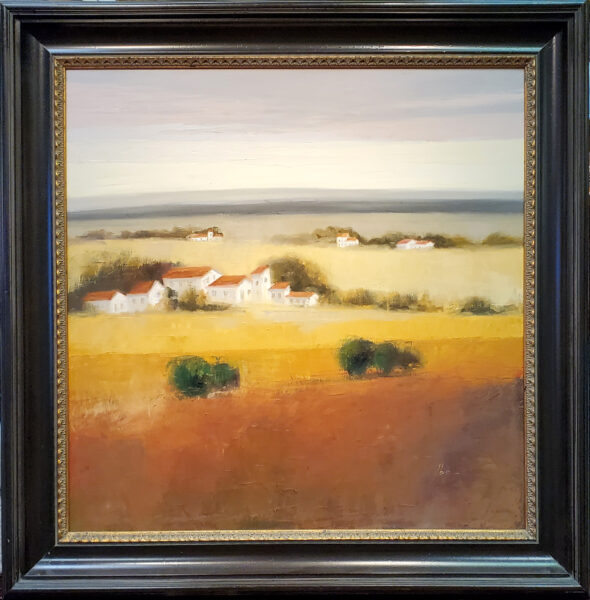 Onyeka Ibe (born September 29, 1971) is a Nigerian-born American abstract expressionist painter. He achieved international recognition for his dramatic approach to painting. At the age of 16, he first exhibited his work at The National Gallery of Modern Art, Lagos. He was recently featured in World Art Business News and has been described by the Atlanta Journal as “one of the most exciting young painters to emerge from Sub-Saharan Africa since the 1990s”. He was awarded “The Best SOLO Artist of the Year 2006” at the International Artexpo New York. In July 2007, Art Business News profiled and named him as one of “Today’s Top Artists”.

Ibe was born not long after the end of the Nigerian civil war and grew up in a developing democracy that was abruptly terminated. Violence became the order of the day. As a youth, Ibe realized that his artists’ sensibilities could move him in either of two directions—either to fight back at such dehumanizing situations, or to escape inward by searching for elements that reflect humanity. He chose the latter.

Encouraged by his father, a painter himself, as a child Ibe was introduced to drawing and how to observe and take notes of inspiring subjects. He looks for inspiration in the natural and humanistic tradition of contemporary impressionism. His paintings express the entire spectrum of nature and human emotions, from exhilaration to cheerfulness and contentment.

Ibe has traveled extensively throughout the United States, Mexico, South America, Europe, Asia, and Africa to exhibit his works, participating in seminars and fine arts workshops along the way. Ibe’s work has been recognized nationally and internationally through numerous awards in juried shows and competitions, and has been featured in major art publications, museums, private collections, and galleries around the world.

Recognition for Ibe’s work has led to his involvement with prestigious art organizations in the United States, especially the Portrait Society of America. He is also a member of Portrait Society of Atlanta, the African American for the Arts, and the Quinlan Visual Art Center in Georgia. Ibe, who is always willing to share his gift and passion for art with others, occasionally invites college students of fine art to his Atlanta studio to study and learn his technique and style.

He has continued his passion, painting portraits of the President, musicians, the political “Who’s Who,” Hollywood personalities, and many others. Ibe recently relocated to New Jersey. He continues to garner consistent media attention for his work in Canada, the United States, and Great Britain.