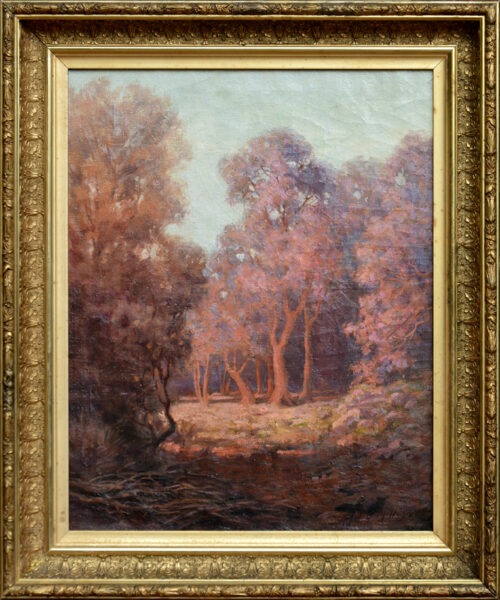 Born in Batavia, Ohio, Royal Milleson became a landscape painter and illustrator who lived in Indianapolis, 1878-1895, Boston, 1895-1900, and Chicago, 1900-1923. During his career, he was a journeyman printer, a newspaper cartoonist and illustrator as well as painter. He took art lessons with George W. Morse of Melrose, MA. In Boston, he was a member of the Boston Art Club. Milleson studied at J. Francis Smith’s Academy, Chicago. In 1903 he had his first painting accepted for exhibition at the Art Institute of Chicago, showing eighteen works there between 1903 and 1915. He also successfully exhibited at the Evanston Woman’s Club. In Chicago he became a member of the Chicago Society of Artists. In 1905 Milleson had a one-man show of watercolors at Bryden’s Gallery on Wabash Avenue in Chicago. He had spent time in the West, and was inspired by the vast mountain ranges. In 1912 A. C. McClurg and Co. published Milleson’s book: The Artist’s Point of View. It is conceived as a series of letters from the artist on the subject of landscape painting and other subjects. The John Herron Art Institute and the Indianapolis Museum of Art acquired his works.