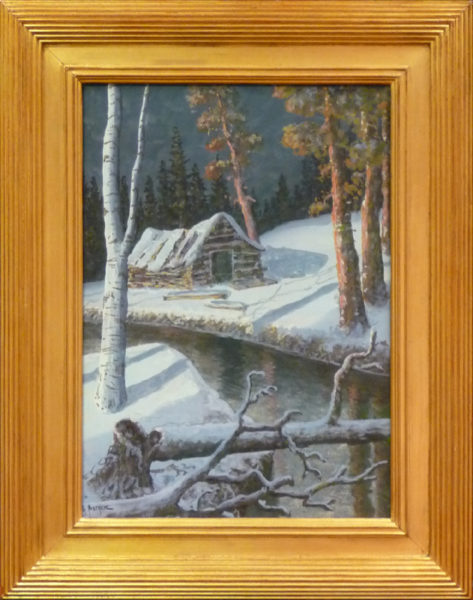 Born/lived: He was born in Saerskovbygda, Elverum, Norway and moved to Chicago USA in 1893. About 1900 he settled in Chicago’s Humboldt Park, an area heavily populated by Norwegian-Americans, where he had his own studio.

Known: Sether is known for snow scenes, nocturnes and still life’s. His style was Realist/Impressionist.

Exhibited: Sether exhibited at the Norse-American Centennial Art Exhibition June 6-9, 1925, which was held at the Minnesota State Fair. He also showed at the Chicago Norske Klub’s Annual Norwegian Art Exhibits which started in December 11-19, 1920. These annual exhibits ended in 1931 when the Norse Art League was formed. Gulbrand Sether exhibited there at Den Norske Kafe on North Avenue (in March and December 1931) but the Art League died that same year. Works by him were exhibited in an exhibition called “The Divided Heart: Scandinavian Immigrant Artists 1850-1950,” curated at the University of Minnesota in 1982. His paintings were also shown in the exhibit, “Norway in America,” sponsored by Vesterheim in Norway in 1989.

Work: The Luther College Fine Arts Collection includes one work by Sether, a snow scene, possibly a landscape of northern Norway. This work is included in the Inventory of American Paintings maintained by the National Museum of American Art at the Smithsonian Institution.

Publications: He was the author of the book Sønnen paa Hofstad: Norsk-Amerikansk Fortaelling (The Son at Hofstad: Norwegian-American Contemplation).