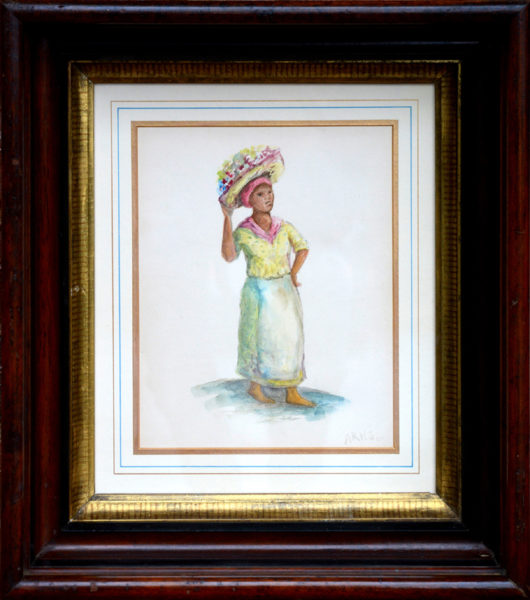 Alice Ravenel Huger Smith (1876-1958)
One of the leading artists of the Charleston, South Carolina Renaissance, 1915 to 1940, Alice Smith was known for her landscape and genre paintings. She was a descendent of several distinguished families. She was largely self taught and had neither enough money nor inclination to go to school. She learned by observing prints of the Japanese ukiyo-e-school, and did numerous woodblock prints using the same principles including the reflection of reverence for nature in her subject matter.

New York artist Birge Harrison was her only real mentor, and their friendship began in 1908, when he and his wife first stayed in Charleston. He encouraged her inclination for soft-edged atmospheric landscapes.

In 1917, Smith and her father published a book titled The Dwelling Houses of Charleston, South Carolina, which has been described as “the seminal volume of the Charleston Renaissance” (Magazine Antiques, 11/98). The book reinforced local pride in the city’s historic architecture, and represented Smith as the primary figure in the local architectural preservation movement.

She was also the founder of the Charleston Etcher’s Club in 1923, which sponsored exhibitions that led to widespread national circulation of views of Charleston through prints in newspapers, magazines, books, etc.

Although she got much recognition for her woodblock prints, watercolor was the medium she loved most and used for her numerous architectural landscapes and genre paintings.