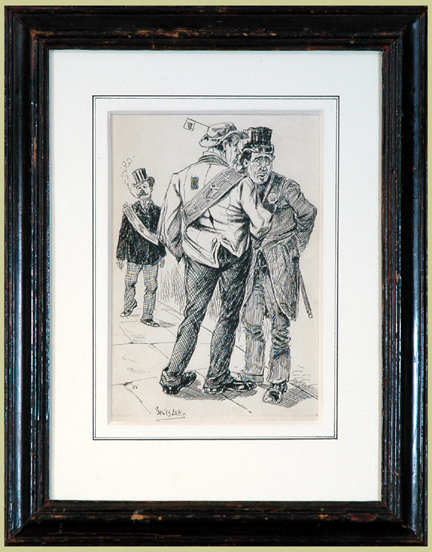 pen and ink on artist board, 9” x 6”, signed lower left, Incribed verso: “The Race Prejudice,” (McCarty) “Why did ye order us out in full regalia parade when it ain’t St. Patrick’s Day.” (Pres. Gillholey) “Because them Spaniards are paradin’ today for Columbus, an haven’t we just as much right, eh?” This drawing is in excellent condition.

Born in Williamsport, PA and lived in NYC. Along with Robert Henri he was an outspoken member of “The Eight,” who first exhibited as a group at Macbeth Gal., NYC, in 1908. Luks met Henri, Glackens, Shinn, and Sloan while working as a newspaper artist in Philadelphia in the early 1890s. After moving to NYC, Luks looked to the everyday world of working class people in NYC for his subject matter, portraying-with a sense of immediacy and drama-the energy of busy, crowded streets, as well as the people themselves, and the raw physicality engendered in such sports as wrestling. After 1915, the artist focused more on rural themes, but during the 1920s he also painted scenes depicting the harshness of life as a coal miner. Luks was one of the founders of the AAPS, which organized the 1913 Armory Show in NYC. He was an influential teacher at the ASL, not only for his methods but for his powerful personality. Studied: PAFA; Dusseldorf Academy; Paris and London. Member: National Association of Portrait Painters, NY; American Painters and Sculptors; NY Water Color Club; Boston Art Club. Philadelphia Press; Philadelphia Evening Bulletin; Spanish War correspondent in Cuba. Creator of comic strip “The Yellow Kid.”