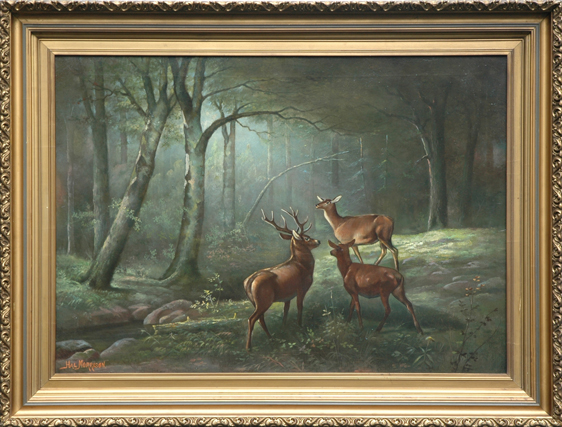 Hal Morrison was a painter born in Prince Edward Island, Canada; active in Atlanta, Georgia, 1883-1918, Auburndale, Florida, 1918-1926 and died in Atlanta. His favorite activities were painting and fishing, and he was most known for his paintings of fish and game in the manner of William Michael Harnett. He graduated from Harvard School of Medicine and worked for two years on the medical staff of the Intercolonial Railroad. He spent the next 7 years traveling and studying art. He then lived in Atlanta, making many trips to Florida, North Carolina and occasionally, returning to Canada. He exhibited extensively and taught art in his Atlanta studio. Though he sold large numbers of paintings in the Atlanta area, his works are rare and hard to come by. Literature: “A Southern Collection” by Estill Pennington, Morris Museum of Art, 1992 “Art and Artists of the South” by Bruce Chambers, Columbia, South Carolina, 1984 “Art Across America, Two Centuries of Regional Paintings 1710-1920”, Volume Two by by William H. Gerdts, Abbeville Press Publishers, New York.